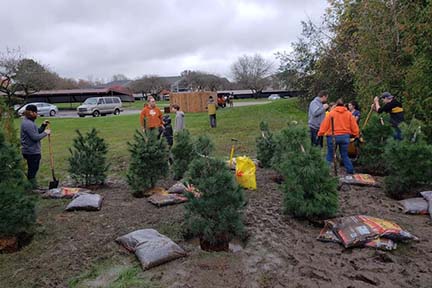 A local scout has planted twenty white pine trees at St. Nicholas Greek Orthodox Church to fulfill the service requirement for his Eagle rank, the highest honor a youth can achieve in the Scouting program.

Theo Krentz of Troop 284 in Lake Orion said he chose a service project with the church after earning the Alpha Omega Award, a religious emblem offered by the Orthodox Church in partnership with the Boy Scouts of America. While working toward the medal, Krentz identified an opportunity to give back to the congregation while increasing Scouting’s visibility.

“I’ve been a member there for several years,” Krentz explained. “Working with Father Michael Manos on my Alpha Omega Award really opened my eyes to just how much Scouting could be mutually beneficial there, despite St. Nick’s not currently having a troop of their own.”

Krentz worked closely with the church leadership in planning the project. The church presented a few options, and together they decided to plant the twenty white pines on the church grounds.

Within the Scouting movement, Eagle projects often see youth from multiple units come together and work toward the common goal. Volunteer recruitment and management are essential tasks for the prospective Eagle. Krentz’s project attracted dozens of scouts from across Oakland County, with youth in attendance representing five different troops.

Though the workday occurred after a series of storms, and the ground was quite muddy, Krentz and his volunteers persevered to plant, fertilize and mulch the new trees.

“In the hours immediately following the project, I was really just tired,” Krentz said. “I just wanted to go home and take a nap. After I rested up, it started to sink in that this was the culmination of all my years in Scouting, and I reflected on how far I had come.”

With his service project complete, Krentz will soon go before a “Board of Review” comprised of adult volunteers and community leaders, which will determine his readiness to receive the Eagle rank. When he passes the review, he will join a unique fellowship, one that only 6% of youth in the program ever attain. For his part, Krentz is thrilled with his project and hopeful it will have a special legacy.

“I think my project served as a great starting point to cultivate Scouting in a community without much exposure to the program, and I’m excited to see where that leads to,” Krentz said. 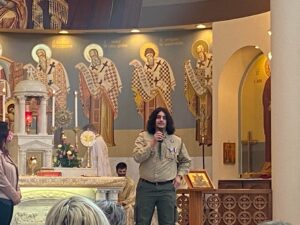 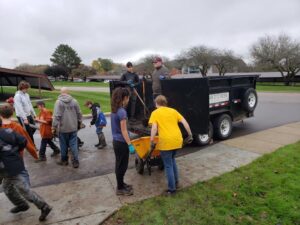 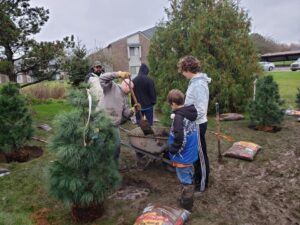 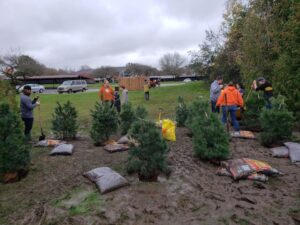 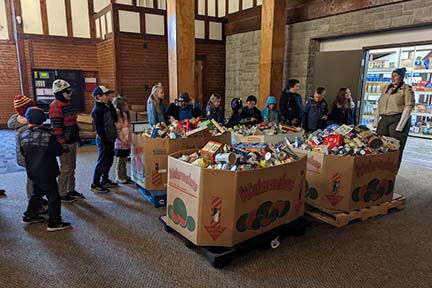 Scouts with the local Michigan Crossroads Council exceeded their goal for this year’s Scouting for Food drive, assembling 112,732 pounds of food for charities during November.

According to event co-chairman Scott Nehls, approximately 4,600 participants from 152 units across southeastern Michigan helped make the drive a success. Around half a million homes were canvassed across Oakland, Genesee, Wayne and Macomb Counties. Through these door-to-door collection efforts, the youth exceeded their objective of 100,000 pounds as well as the totals collected during their 2020 drive.

“This year the scouts collected 10,000 more pounds than last year,” Nehls said. “I think that shows how vital our work was this year and how giving members of our community are.”

The drive was carried out in partnership with Gleaners Community Food Bank, which operated a number of collection sites with the scouts. Participants were also given the option to donate food to local nonprofits of their choice. A joint effort by Lake Orion Pack 59 and Pack 128 brought in over 2,000 pounds of food for the Woodside Bible Church food pantry.

Project lead Bob DeWar explained that civic service is at the core of Scouting, and the drive helps to educate young people about giving back to the community.

“I’m always so excited to see the Scouts in action during this project,” DeWar said. “As Scouts and adult volunteers deliver and sort countless bags of food, a spirit of cheerful service permeates the collection sites.”

According to DeWar, his youth were surprised to see how much food their neighbors contributed to the drive. However, he said they were even more excited after they dropped the food off at a Gleaners collection site.

“When they arrive at the collection site and see how their one car load combines with hundreds of others to make a much larger impact, their smile tells me they realize they are part of something bigger,” DeWar said. 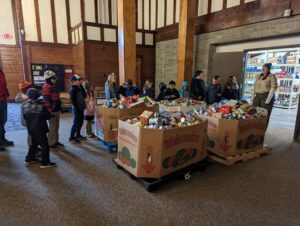 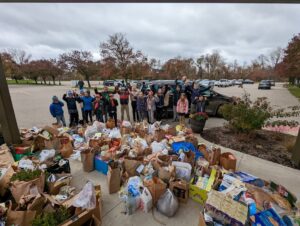 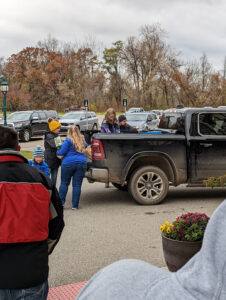 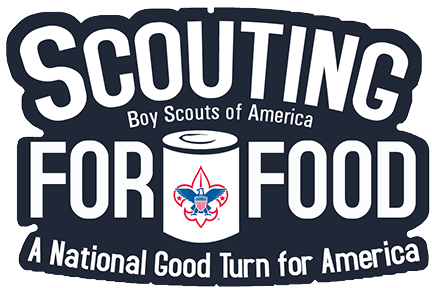 Scouts across southeastern Michigan are preparing for their annual Scouting for Food event, a nonperishable food drive set to begin in early November.

The Scouting for Food initiative calls on thousands of youth to collect essentials for local food banks. Scouts will distribute flyers to homes in their communities on Nov. 6, requesting that residents leave donations on their doorsteps for pickup in one week. Scouts will then revisit those houses on Nov. 13 to retrieve bags filled with canned goods, cereal, pasta, peanut butter, juice and other items, according to project coordinator Bob DeWar of the Michigan Crossroads Council.

“Cheerful service is a keystone of the Scouting movement, and few service projects have such a profound impact on our youth as Scouting for Food,” DeWar said. “It is a cherished tradition in this council, and we only plan to expand it in the years to come.”

The drive is typically a massive undertaking, with flyers distributed to as many as half a million homes. The Michigan Crossroads Council will carry out this year’s efforts in partnership with Gleaners Community Food Bank, which will support drop sites in Wayne, Oakland, and Macomb Counties. Scouting volunteers collect and organize the food at these collection sites and prepare them for transport on Gleaners’ trucks. Scouts are also given the option to select a beneficiary of their choice, allowing youth leaders to consider options and make their own informed decisions.

“Michigan scouts and volunteers recognize that the success of this program is more important than ever in these unprecedented times,” DeWar said.

According to studies sponsored by Feeding America, one in seven children living in Michigan faces hunger, and the ongoing pandemic is believed to have only exacerbated this situation. With this in mind, the council has set a goal to collect and distribute over 100,000 pounds of food in 2021. DeWar said he is confident that, with the community’s support, they will undoubtedly exceed that figure.

Additional information about the drive can be found at: https://michiganscouting.org/scoutingforfood/ 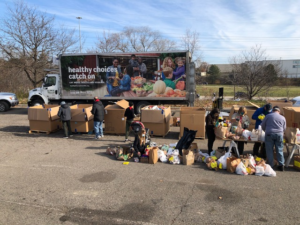 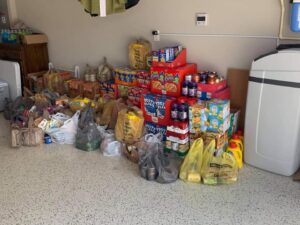 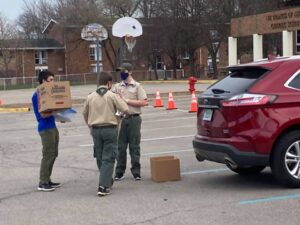 Scouting’s local Pontiac-Manito District has experienced a large increase in membership this fall, with registered youth increasing by 27% over the beginning of the year.

According to the district, which spans much of Oakland County, the sudden growth suggests a reversal of the negative trends experienced by many extracurriculars during the pandemic. With around 850 active participants, Pontiac-Manito is one of the larger districts in Michigan.

“I think everyone’s ready to get outside again,” Cathy Cowger, a volunteer commissioner for Scouting in White Lake and Waterford, said. “I think this program offers them an opportunity to do that.”

Much of the increase is concentrated within the Cub Scouts program, which serves boys and girls from kindergarten through fifth grade. Cubmaster Eric Stevens of Pack 59 in Lake Orion said he watched his unit more than double in size during the fall.

“Through a very difficult year, Scouting continues to be a great value to the families in our area,” Stevens said. “Our growth in membership proves that the fundamentals of our program remain relevant and exciting for everyone involved.”

While most new registrants have signed up for the Cub Scouts, the district’s Scouts BSA program for middle and high schoolers boasts one of the highest retention rates in the country at over 95%. In August, youth representatives from across the region gathered for a “Youth Leaders Membership Summit,” which laid some of the groundwork for the fall membership drive. This included an initiative to support Cub Scout packs and their programs, bolstering retention and crossover rates.

The newly recruited cubs will have the opportunity to experience their first scout trip at Camp Agawam in Orion Township later this month. The district’s Fall Camporee will include a “Cub Fun Day” on October 23 from 1:00 to 5:00 p.m., featuring archery, field games and a robotics demonstration. The event is open to the public, and families from the community may attend and experience Scouting at no charge. 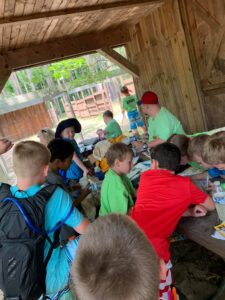 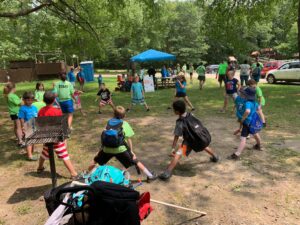 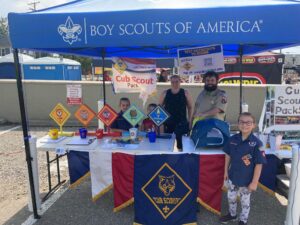 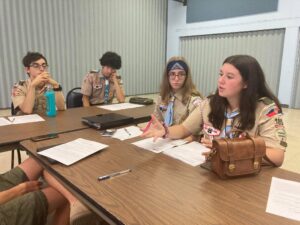