Around the OAA: Brother’s Tribute to the Myre Family 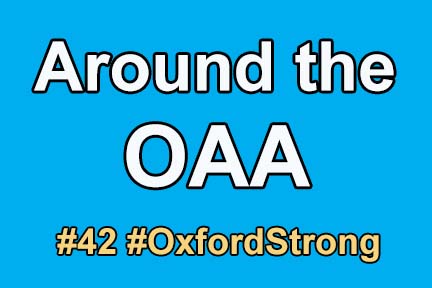 This is a blog that is devoted to the OAA. We cover 23 schools from Oakland County to Wayne County. From Oxford to Harper Woods. This blog will give insight and projections around the OAA.

Brother’s Tribute to the Myre Family.

Trent, Ty, and Tate: My tribute to Tate Myre and the entire Myre Family

One night in September, as Lake Orion and Oxford played each other in a JV Football contest in Oxford, at halftime, there was a group of Oxford Football Players playing football, having fun with each other. One of those kids was Tate Myre. I watched them all play, thinking, this is what football is about, this is what friendship is all about. At 0-3, that team could have pouted but they didn’t, they stayed together, as a result, they were able to get into the playoffs and win a playoff game. My brother wrote a wonderful article about Oxford Football, an article I bet Tate read, I look back to those group of kids playing, yeah that same group of brothers, playing for each other, playing for nothing to lose.

I remember watching Tate along with his brothers Trent and Ty, all of them very successful student athletes, each of them great academic scholars, football players, wrestlers but even better men, well loved, honest, willing to do anything, really can’t ask for a better trio of brothers. Tate very much looked up to his brothers, you could tell in his football play, his twitter posts, often retweeting one or both of his brothers, their play, personalities, very similar. A lot of credit goes deservingly so to Mr. and Mrs. Myre, they raised three wonderful kids, each of them, star football players, star wrestlers, loved their friends, and community, in many ways, the Myres, all of them represent Oxford proud and will continue to represent the town proud. I know there has been talk about naming the football stadium after Tate but I think they should name after all the Myre’s, Tate very much learned from his brothers, each of them learned from their parents, you can’t ask for better than that.

As a Dragon, I had the pleasure to watch all the Myres play football, despite always wanting to beat Oxford year in and out, it has been a treat to watch them all play, their hard work, their competitiveness but also their overall personalities are what I’m most impressed with, putting their team, their community, their student body, putting all of that first over self. I knew that many young ones at Oxford look up to all the Myres and no doubt they will continue to. Their personalities, how they care about everyone they come across, going to bat for others, this is how I will always remember the Myres. When it comes to Oxford Football, five names stand out (sorry Coach (Billy) Keenist even though from an 06 perspective that would be you) Rowley, Line, Brown, Carpenter, and Myre, those names stand out and should always stand out.

On Sunday, Tate decided to befriend me on twitter, I have befriended a lot of his Oxford brothers and like I do for my Lake Orion kids, I will check up on Oxford kids as well and talk to Oxford Coaches. After Tate befriended me, I said to myself that I would befriend Trent, Ty, and their Dad, it will be up to them if they want to follow me or not, after Tate followed me, I reached out, I thought at first that he wanted to follow my brother since he writes the OAA blog so I direct messaged him and thanked him for following me on Twitter, he told me that he appreciated it. That meant a lot, it is something I will value forever. I had truly hope to check up on him from time to time and see how he was doing, no doubt my best friend the late great Steven Crowder will do that for me now.

The next time I go to Oxford and look at that football field, a lot of emotions will come out, one of a beautiful family that has devoted their lives to Oxford Football, Oxford Wrestling, and Oxford Athletics, how two wonderful parents raised three boys, not just to become great athletes but even better men, it shows in the Oxford Community. Together, will be Oxford Strong but also Myre Strong.