ONTV Announces the Premiere of New Series “Ideas and Insights” 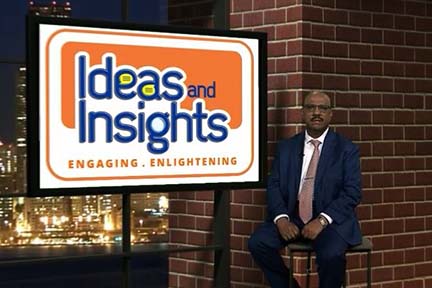 Orion Neighborhood Television, Orion’s community access television station, announces the premiere of a new series entitled “Ideas and Insights.” The program will premiere on June 11 at 9 p.m. on Comcast Ch. 10, AT&T U-verse 99 and simulcast at orionONTV.org. The show is produced and hosted by Dr. Badrinath Rao, Associate Professor of Sociology and Asian Studies at Kettering University. In the 8 episode series, Dr. Rao remotely interviews authors and professors from all over world to discuss topics about some of the most pressing issues of our time.

In the premiere episode, Dr. Rao discusses the distressing state of democracy across the globe with John Keane, professor of politics at the University of Sydney in Australia. Prof. Keane offers a seminal analysis of the aberrations of democracy from his latest book, “The New Despotism.” “Ideas and Insights” is like no other program ONTV has produced before,” says Ian Locke, ONTV executive director. “When Dr. Rao approached us with his idea for a program that would challenge viewers to think about the times we are in, we couldn’t say no. This program connects our viewers with leading thinkers of our time from across the globe to inspire us to think about how we interact with, and treat one another. It’s very inspiring and thought provoking.”

The program is produced at ONTV, but will be shared nationwide with other community TV stations. “Meaningful programming isn’t just found on commercial media outlets,” says Locke. “Stations like Orion Neighborhood Television exist to allow the public access to media, to encourage free speech, and the sharing of independent ideas.”

Orion Neighborhood Television is an award winning community access television station serving the Village of Lake Orion and Orion Township. ONTV is housed at the Orion Center at 1349 Joslyn Rd. ONTV can be seen on Comcast Cable, AT&T U-Verse Channel 99, Roku and Amazon Fire TV, via the Cablecast channel. Programs can also be seen on-demand at www.orionontv.org. Contact ONTV by phone: 248-393-1060, Email: ONTV@orionontv.org.