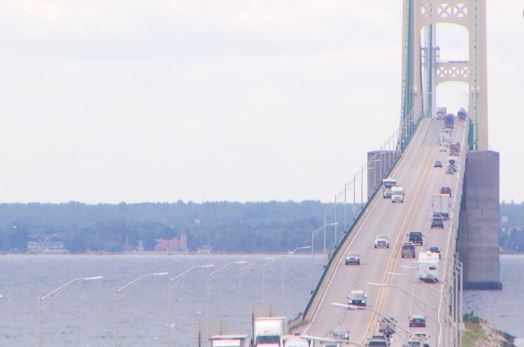 ST. IGNACE, Mich. ­– It was a chance occurrence, but it still makes for a cool story.

After driving the 200 millionth vehicle across the Mackinac Bridge at 6:18 p.m. Wednesday, June 15, the Dalman family of Tawas City now has the bragging rights and the sole claim to this milestone. Kurt Dalman was driving, with passengers Anna Dalman, and their children, Seth and Teresa.

“We’re headed to Pictured Rocks. This will be the kids’ first big hike,” Anna Dalman said. “We were very surprised. We had no idea (this milestone was coming up).”

Mackinac Bridge Authority (MBA) Chairman Patrick “Shorty” Gleason, member Caroline Cheeseman, and MBA staff met the Dalmans outside on the toll plaza after they drove their 2021 Toyota Corolla hybrid through the booths, paying $4 cash in the northbound direction. They presented the family a framed print of the Mackinac Bridge, while Amy Millard, executive director of the Mackinaw City Chamber of Commerce, and Lora Brown, executive director of the St. Ignace Visitors Bureau, gave them a gift basket full of local items.

“It’s our customers who pay the tolls that support the ongoing operation and maintenance of the Mackinac Bridge, so it’s only right that we recognize this milestone in the bridge’s 65-year history,” Gleason said on the occasion. “The bridge has been a critical connection for our state for more than six decades now, but it’s remarkable to know that so many vehicles, and countless more people, have crossed in that time.”

On Sept. 6, 2009, Richard Snyder of Clare, Michigan, drove the 150 millionth vehicle across the bridge.

Construction on the Mackinac Bridge began in May 1954 and the completed structure was opened to traffic on Nov. 1, 1957. The MBA’s sole source of funding is from tolls and fees collected, with all revenue used to maintain, operate and protect the bridge. More information about the bridge can be found at www.MackinacBridge.org.