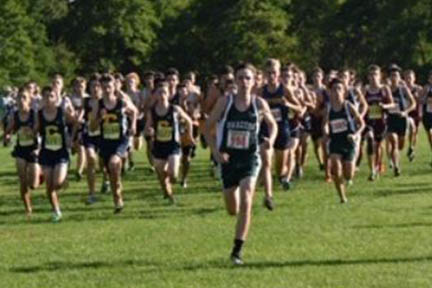 After cruising to a 47-point victory in their season-opener at Anchor Bay High School on September 2, the Lake Orion boys’ cross country team traveled to Kensington Metropark for the Averill Invitational on September 11.

Facing tougher competition in the 12-team field, the Dragons took home their second-straight victory by tallying 41 points, 10 ahead of the second-place Brighton Bulldogs and 65 better than the third-place Milford Mavericks.

Senior Clayton Kuiper was Lake Orion’s top individual runner, finishing in second-place at 16:44, followed by classmates Hong Bing Tang in third at 16:46 and Will Houvener in eighth at 16:58.9.

A course the Dragons have been visiting for years, Kensington Metropark presents a challenge with its hilly terrain, but head coach Stan Ford – who is in his 40th season – knows how to prepare his young men for the task.

“It was interesting today because a lot of guys in the top group, they ran as fast on this course as they did on the flat, fast one last week, so we know there’s improvement,” Ford said.

“We train on hills, and we should be good at this course. I don’t take mile split times because last week, they’re fast, and this week, they’re going to be slower and I don’t want them to panic and think, ‘I’m 10 seconds slower than I was last week.’ No, you might be in great shape.

“I want them to race. You race the body and don’t worry about the time and that’s what happened, the group got out there and they were in the top of the field, then, a mile-and-a-half, they start spreading out and start asserting themselves individually.”

Lake Orion has a nice balance of experience and youth, as their top-10 runners this season presently consist of five seniors, three juniors and two freshmen.

Having five of these runners slated to return next fall is a plus, but the five members of the Class of 2022 – Adam Hafeli, Houvener, Kuiper, Ronnie Leonard, and Tang – figure to continue to be the leaders of the team.

Two meets in, Ford shared what he likes best about his group and how they continue to improve from here.

“Today was a better test, more competitive teams, so it tells us more about our team,” he said.

“It also puts a target on our back, so how we handle that pressure throughout the rest of the season is going to be important. It’s a senior-led group, so I think they’re going to handle it just fine.”

The Dragons will look to keep rolling in their first Oakland Activities Association (OAA) Red Jamboree on Tuesday, September 14 against the Birmingham Seaholm Maples, Clarkston Wolves, Oxford Wildcats, Rochester Adams Highlanders and Troy Colts at their home course at 4:30 p.m.

The first of three “Jamborees” that decide the league standings, Lake Orion became very familiar with their own course during the COVID-19-impacted 2020 season.

Following their first Jamboree, the Dragons will head to Springfield Oaks County Park in Davisburg on Saturday for the 53rd Annual Holly Invite/Duane Raffin Festival of Races at 11:20 a.m.